Few know of the original local cemetery, Beaumaris Churchyard Cemetery. Sadly you can’t visit the graves of any of the 123 early settlers still interred in this cemetery. In 1954 the Moorabbin Council granted a permit to the Methodist Church to subdivide the land and seven houses were built straight over the top of the graves in a new street given the name of Bickford Court, named after James Bickford Moysey, the first to settle in this area in 1845, later naming his property Beaumaris Park.

This early cemetery disappeared long ago, but if you look closely you will see a small brass plaque marking the site on the pavement in Balcombe Road just past the western corner of Bickford Court. The old cemetery is located under Nos. 1, 2, 3 and 4 Bickford Court and 300, 302 and 304 Balcombe Road. There is a memorial at Pioneer Cemetery dedicated to those buried at Beaumaris Cemetery, stop and read the names next time you visit, you may find an ancestor.

The former Beaumaris Wesleyan Cemetery came into being in 1855 when the first Cheltenham settlers, Stephen and Mary Ann Charman, gifted a parcel of land to what was then the Wesleyan Church. A little wooden building was built on the land and served as the local Wesleyan Church and the first cemetery of the area was established in its churchyard. The new cemetery would be the final resting place for two of the Charman’s own children, Elizabeth Lucy (1855) 10 months and John Arthur (1859) 6 months. This small cemetery operated for only 11 years. The last known burial was the son of Thomas Lay, one of our earliest undertakers - 3 year old Arthur Lay passed away 11 March 1866, interred with his 14 month old brother William (1862) 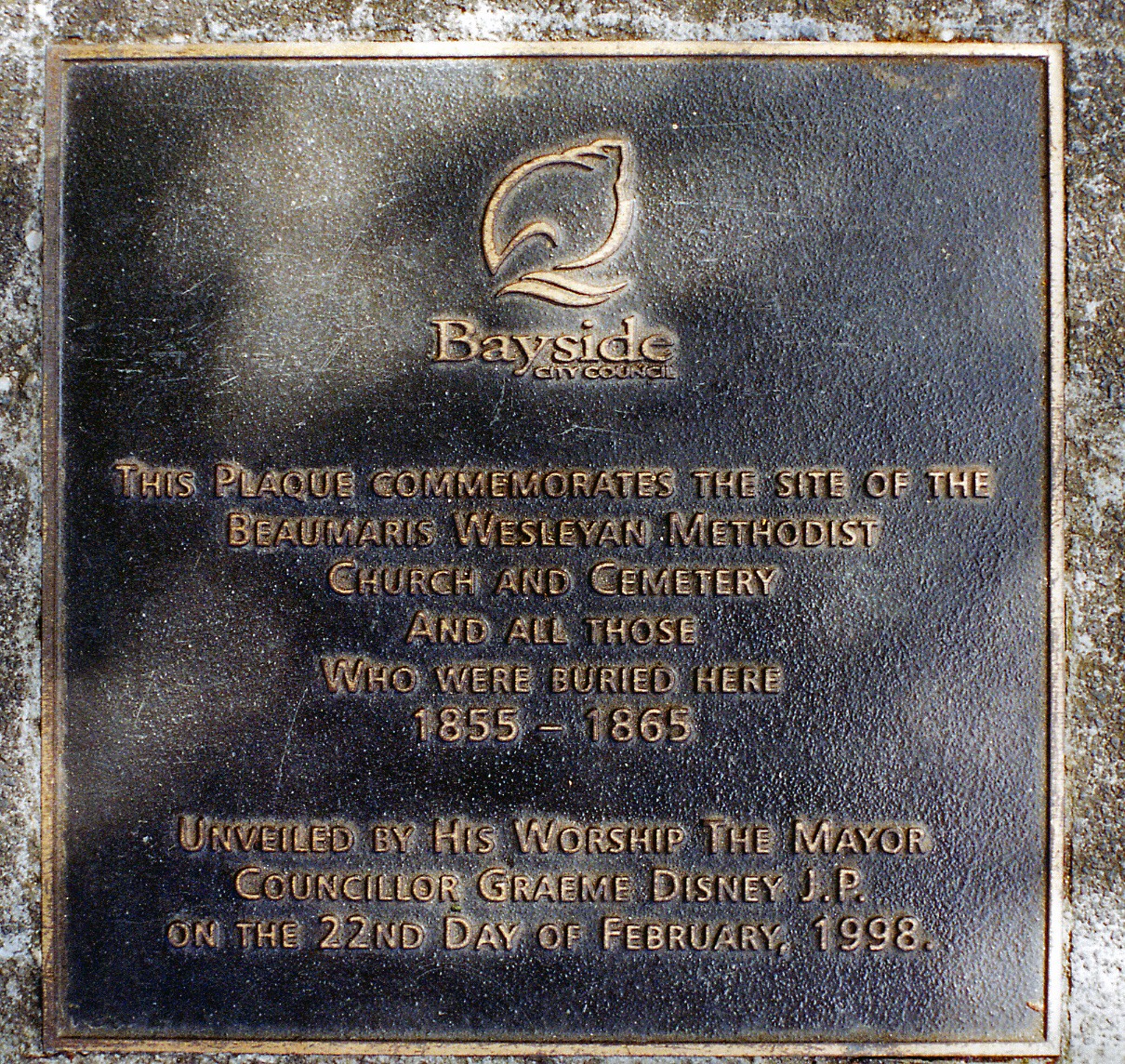 What caused its closure? The Churchyard cemetery was small and reaching capacity, but the main problem - only those of the Wesleyan faith were permitted to be buried there. Other faiths had to bury their family at Brighton which had also opened in 1855. A short drive for us today, but the journey was long and time consuming by a cart bumping along an unmade road to bury their loved ones, who with no embalming needed to be buried in two days. The growing community needed a cemetery of their own and a committee was formed to petition the State Government for land.

What became of the Beaumaris Cemetery? The church building on the site was sold in 1893 and moved to Langwarrin. The land was then used to graze cattle and Perry Bros used the site as winter headquarters for their circus animals. There are internet sites that suggest that one of their elephants was buried on the site, but long term locals will tell you it was buried at the corner of Balcombe and Cromer Roads where the old Ampol service station was later located.

In 1954, with increased population and local land values growing, a surveyor acting on behalf of the Methodist Church Trustees made an application to the Moorabbin Council for a permit to subdivide the land. Everest Le Page, Moorabbin Councillor and Cheltenham resident, argued that it was not appropriate to sub-divide the site as he believed there were still bodies buried there, but by then the names had long been forgotten and no one bothered to check the Victorian death registers which would have revealed the names of those who remained buried at the old Cemetery. Despite Cr Le Page’s objections, approval was given and the seven lots of land were subsequently sold for housing development.

We are indebted to local historian Shirley Joy and her helpers who finally undertook the painstaking research required to reveal the names of those who to this day remain buried at the Beaumaris Churchyard cemetery. Many of the burials were the infants and young children of our early settlers, but there were a number of adults buried there as well. Recently we were asked if anybody had been removed from the Churchyard cemetery. We have been able to trace one, Elizabeth / Sarah Gott originally buried at Beaumaris as in 1861, but exhumed and re-interred at Pioneer in 1871 when husband William passed away.

All the Beaumaris burials are listed on our burial search database available to all members; enter Beaumaris Churchyard as the cemetery you are searching and you can see the full list of names.